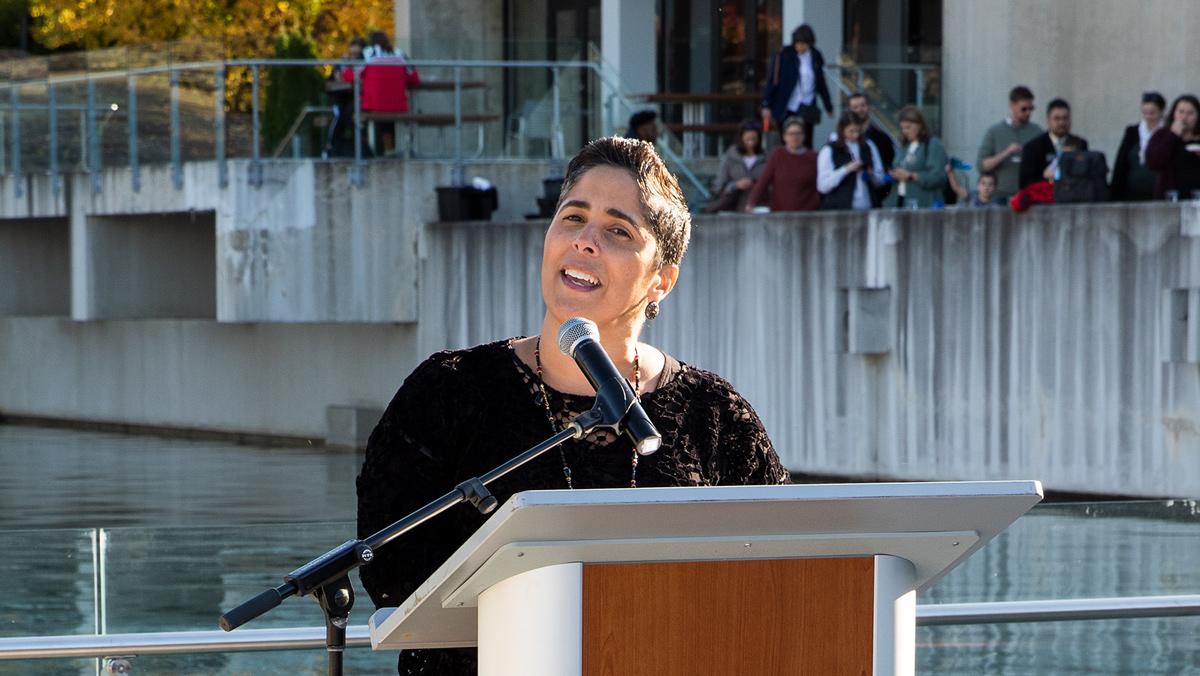 Ithaca College President Shirley M. Collado is stepping down from her position and will leave the college Jan. 10, 2022. The Ithaca College Board of Trustees has appointed La Jerne Cornish, provost and executive vice president, as interim president effective Aug. 30, 2021.

In a July 8 email to the college community, David H. Lissy ’87, chair of the board, and Jim Nolan ’77, vice chair of the board, announced that Collado has accepted the position of president and chief executive officer for College Track, an organization that works to help students overcome  systemic barriers to earn bachelor’s degrees. Cornish will serve as interim president for the entire 2021–22 academic year and Collado will be the senior advisor to the interim president and the board until Dec. 31, the email stated. During this time, the board will also evaluate the best approach for the next president.

“On behalf of the board, we offer our most sincere congratulations to President Collado on her appointment at College Track and express our deepest appreciation for her service to Ithaca College over the past four years,” Lissy and Nolan said in the email. “While we are saddened that she will be departing the college, we are pleased that she is being given this extraordinary opportunity to help support college access for deserving students.”

Collado was appointed the ninth president of the college in 2017 after former president Tom Rochon’s resignation. Rochon retired following a semester of protests led by POC at IC — a group that worked to address racism and discrimination on campus — and votes of no confidence from both faculty and students.

Collado is the first Dominican American to lead a four-year college or university and the first person of color to lead Ithaca College. In 2018, Collado received backlash and support from the college community following news that she pleaded no contest to a sexual abuse charge in 2001. During her time at the college, Collado and her Senior Leadership Team (SLT) led the development and implementation of the strategic plan Ithaca Forever, which aims to reimagine structures in the college. As a part of the strategic plan, the college launched its Master of Science in physician assistant studies (PA), which is admitting students for Fall 2021.

In a July 8 email to the college community, Collado acknowledged the work that she and the community have done to develop and implement the strategic plan, which she said guided her values as president.

“I believe so sincerely in the promise of Ithaca College, and I will always cherish the exceptional people within this community whose lives I have been honored to be a part of,” she said in the email.

Some members of the college community, including students, staff, faculty and alumni have voiced fierce opposition against these cuts and have critiqued Collado and Cornish for their role in the process, specifically for a lack of transparency and shared governance. Collado and Cornish have denied requests to delay the timeline of the APP, along with multiple requests by The Ithacan to disclose their current salaries. Groups like Open the Books and IC Alumni Against Austerity have held protests and gatherings throughout the 2020–21 academic year to fight the APP and criticize Collado’s handling of the cuts. The Faculty Council and Student Governance Council even considered holding votes of no confidence — a symbolic vote to express a lack of trust in Collado’s and the SLT’s ability to lead the college — but no votes were held.

In her email, Collado said that her decision to leave the college was one of the most difficult she has made and voiced her confidence in the board and Cornish to continue to lead the college.

“You will forever be my IC family and it has been my greatest honor to serve as the ninth president of Ithaca College during such a historic time in our sector, our nation, and our world,” she said in the email. “I look forward to working alongside all of you over the next six months, as we continue our momentum and progress in positioning Ithaca College and our beloved community for the amazing things yet to come.”