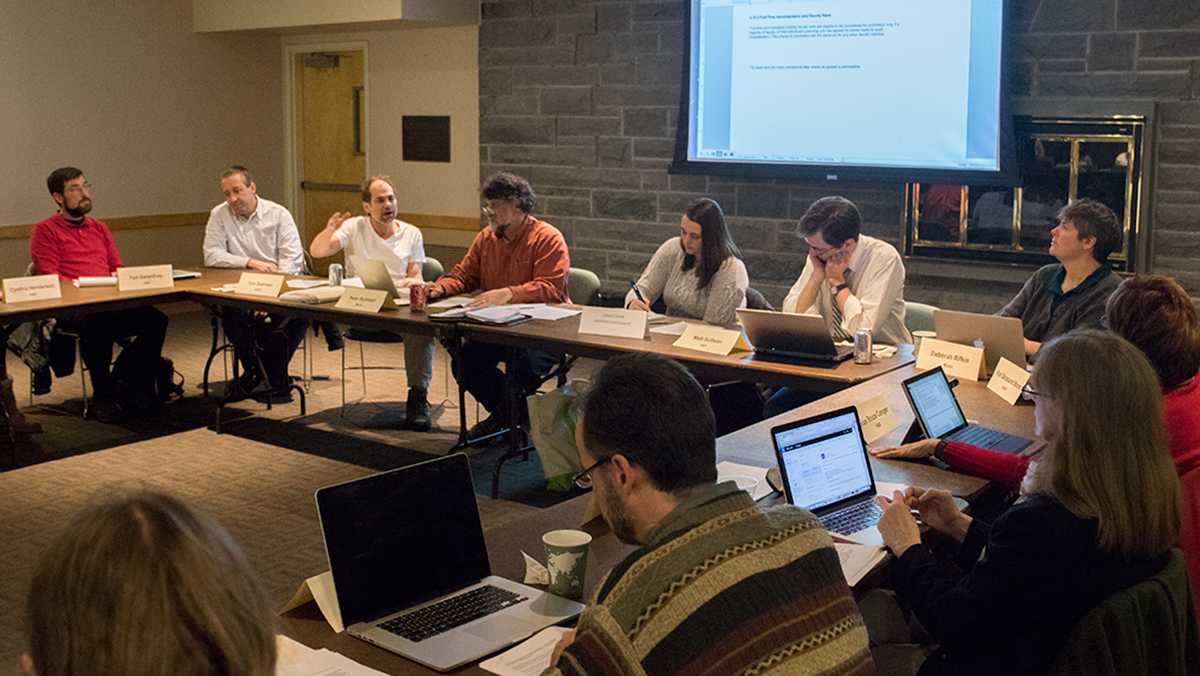 Faculty Council members discussed a potential new administrative position and having a workshop to educate the council on diversity and inclusion.

At the Jan. 19 Faculty Council meeting, Benjamin Rifkin, provost and vice president for educational affairs, said he is tentatively calling the position the “associate provost of transformative learning,” although that name is not final. The position would primarily support faculty and staff who work on what Rifkin calls “transformational learning experiences”: undergraduate research, civic engagement, credit-bearing internships and study abroad.

Rifkin said after the elimination of the positions of the associate provost for academic programs and the assistant provost of extended studies since the 2014–15 academic year, the addition of an administrator would help with the work load.

While study abroad programs are supported by the Office of International Programs and Extended Studies, Rifkin said the Office of Civic Engagement needs to be expanded to better support civic engagement opportunities. He said there are currently no support structures on campus for faculty involved in undergraduate research and credit-bearing internships.

“Donor support is very important because no matter how hard we try to reduce the costs of studying abroad, we have students at Ithaca College — and we would like to have more — who come from socio-economic backgrounds that compel them to work during the semester of enrollment,” Rifkin said. “When they go to Paris, they can’t work, so the cost of going to Paris is that much greater for them.”

When responding to questions from Faculty Council members, Rifkin said he intends to conduct a national search for the position.

Rifkin said he would like to post the position in the spring and search during the summer if he had the time but also acknowledged that filling this position was not as important as dealing with current issues of developing more efficient shared governance, the campus climate, diversity and inclusion, and the search for a new president.

“The administration has been accused in the past of using this body to come in, propose something and then say, ‘Well I ran it past the faculty,’” Turkon said. “We are not faculty; we are representatives of the faculty.”

Michael Trotti, professor in and chair of the history department and Faculty Council member, said to be sold on a new administrative post, he needs a thorough explanation for why the post is needed.

“I am not at this point convinced that a new administrative position is the best way to go about pursuing those [goals], especially in a time when we’re trying to cut back in so many ways to make IC more affordable,” Trotti said.

Tatiana Patrone, associate professor in the philosophy and religion department and Faculty Council member, said she is open to the position and thinks her department could potentially benefit from it, but she needs to know more.

“The questions that people will be asking have to do with the perception that there’s an administrative bloat on campus,” Patrone said. “There’s always the concern that it’s a top-down initiative.”

Following Rifkin’s presentation of the potential new position, the council discussed ideas on creating a space for faculty to bring grievances to the council, as well as hosting listening sessions on a broader scale on the campus climate to help with “healing” the campus community. During these discussions, Cynthia Henderson, associate professor in the theater arts department and Faculty Council member, put forward a motion — which was approved unanimously — to have a workshop for members of Faculty Council on issues of diversity and inclusion.

Faculty Council has scheduled a town hall meeting for 12:05 p.m., Feb. 16 in Textor 102 to allow members of the campus community to discuss the issues they have experienced on campus in a safe and supportive space. Peter Rothbart, chair of Faculty Council, said he expected the meeting would be highly attended given the results of the no confidence results for students, faculty and staff.

Rothbart also said he planned to convene the Tri-Council — the executive members of the Faculty and Staff Councils and the Student Government Association — in the near future to discuss “how to move the college forward in a period of transition.”

Henderson, who was on sabbatical during the fall semester’s turbulent events, was not surprised by the unanimous decision to approve her motion for a workshop.

“If we’re going to be a leader for the campus in terms of speaking for our colleagues, in terms of putting forward example of what needs to happen to progress and heal, we need to be educated to be able to do that,” Henderson said.