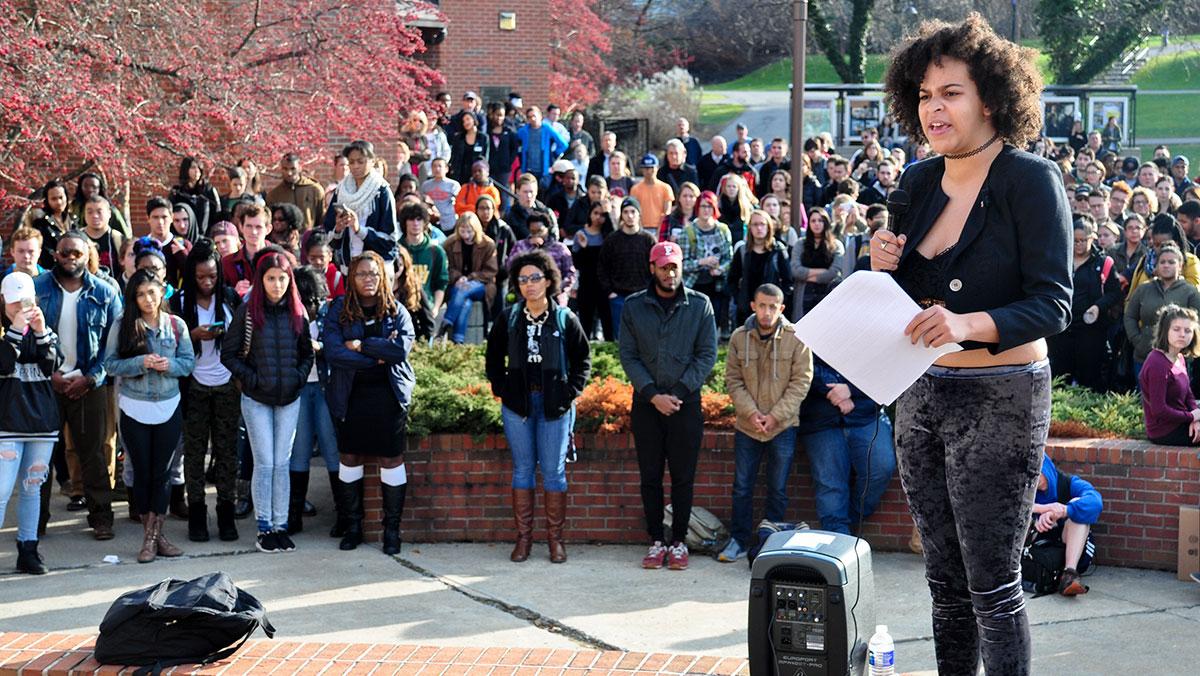 Sam Fuller/The Ithacan
Junior Tate Johnson addressed the crowd of an anti-racism rally held Dec. 11 at Free Speech Rock at Ithaca College, during which attendees voiced their criticisms of President Tom Rochon. Rochon was called upon to speak at the event.
By Grace Elletson — Staff Writer
Published: April 27, 2016

During the Fall 2015 semester, colleges and universities across the country were rocked by student protests addressing racial tensions on campuses. Ithaca College was also affected by these issues, and it is among many other institutions that are now trying to heal their communities while also facing losses in enrollment and retention.

Last fall, students at approximately 79 institutions issued demands for change to their institution’s administration, according to TheDemands.org. Many of these institutions turned to heightening their initiatives to diversify students and faculty as well as to promote inclusion on campus. At least 10 colleges have also hired chief diversity officers, one of the fastest–growing positions in higher education, to help carry out these diversity commands.

Protests erupted at the college after a series of events, including tension between resident assistants and Public Safety officers, racially offensive comments made during the Blue Sky Reimagining Kick-Off event and a racially insensitive “preps and crooks” party planned by the unaffiliated fraternity Alpha Epsilon Pi.

The campuswide walkout and sit-in protests were organized by a group called POC at IC, which called for the resignation of President Tom Rochon. Rochon announced that he would retire July 1, 2017.

Ithaca College After the Protests 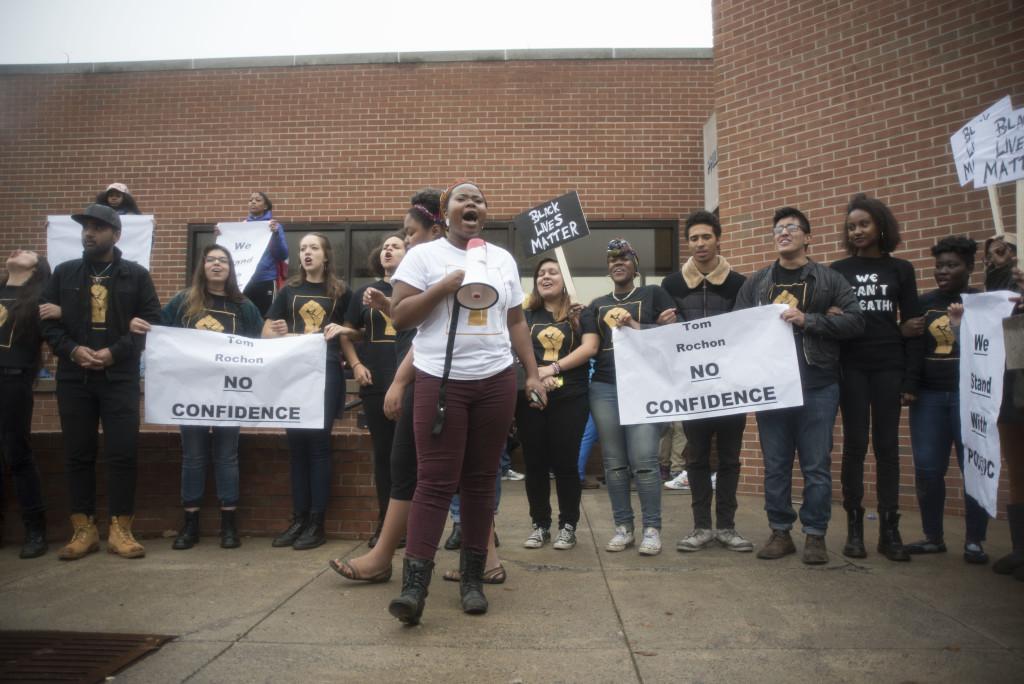 However, the college’s retention rate has taken a hit, specifically within the freshman class, said Gerard Turbide, interim vice president for enrollment management. He did not speculate as to whether the protests had to do with the loss of students, but other experts and faculty see this as a trend.

Turbide said that between the fall and spring semester, the college has retained 96.2 percent of students, compared to 96.9 percent in 2014–15 and 2013–14. Altogether, roughly 257 students decided to leave out of the 6,769 who enrolled at the college in the fall.

Thomas Swenson, professor and chair of the Department of Exercise and Sport Sciences and a member of the Institutional Effectiveness and Budget Committee, said these students represent a large loss monetarily for the college.

Swenson said the average financial aid rate that is given to students is around 47 percent, which brings down expenses to about $33,000 per student. Multiply $33,000 by the 257 students who left the school, the college could face an estimated loss of $8.4 million.

Doreen Hettich-Atkins, senior assistant to the senior associate vice president for student affairs and campus life, conducts the exit interviews for students deciding to leave the college. She said the majority of students whom she interviewed brought up the same reasons she usually hears: students’ transferring somewhere else, the college’s being either too close or too far from home and for financial reasons. She said fewer than a dozen students said the protests or racial climate affected their decision to leave the college. The Office of Institutional Research would not publicly release the racial identities of the students who left the college.

Because of this retention drop, Turbide said, the Student Success Committee was created April 8 to research and address matters related to student retention.

Elizabeth Bleicher, who serves on the committee and is also an associate professor in the Department of English, said the loss of retention could be attributed to the trend of students’ generally transferring at an increased rate and also because of the campus climate last fall.

“We imagine that there may be some students who felt like the climate in the fall made them not want to stick it out for a full year,” Bleicher said. “The good news is that … we think that those were the students who were going to transfer anyway.”

Roger Richardson, associate provost for diversity, inclusion and engagement and interim chief diversity officer, said he does not think the decrease in retention had to do with the protests. He said the issues of discrimination students faced last semester are issues that are present everywhere in society.

Richardson said he remains hopeful that the initiatives that have been put in place to promote diversity and inclusion on campus are working and that the college is making progress. However, many of the deadlines for these diversity initiatives have been missed.

“Are we at the transformative stage? No. Are we at the emerging and developing stage? I would say yes,” Richardson said. “We’re not there yet.” 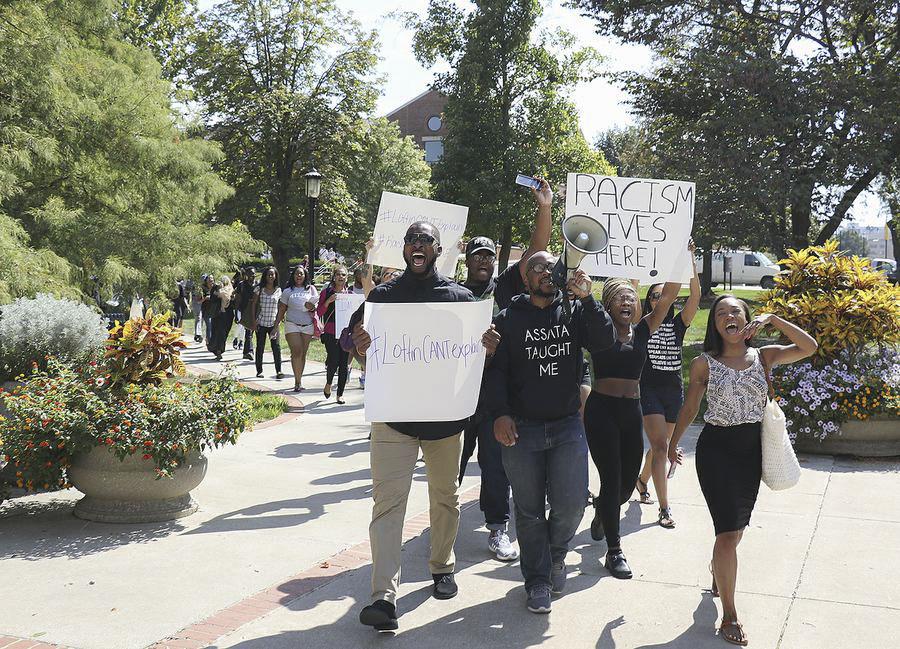 Where diversity initiatives are receiving positive feedback in higher education, there is a common theme: close communication and working relationships between students of color and administrators.

Cornell University also faced unrest last semester when the Black Students United group gave the administration a list of demands in the fall asking for them to rename the Cornell Plantations, develop diversity coursework and hire more people of color in the health center for counseling.

Senior Carlton Burrell, co-president of the group, said the administration is being very cooperative in responding to the demands.

“We have held meetings addressing all the concerns and began strategizing on how best to implement these changes,” Burrell said.

Emory University also faced protests last fall in response to racial tensions on campus. The Chronicle of Higher Education reported students created a list of demands that are now being addressed by using working groups. Ajay Nair, the senior vice president and dean of campus life, has been praised by students for working so closely with them.

These working groups are going through each demand the students created and deciding the best way to address problems on campus. So far, the students have secured the return of a mentorship program to assist first–year science students and established a student-led hate speech rapid-response team. Students are also working on how to increase job security for faculty of color and increase the number of faculty of color on campus.

Other institutions have responded less effectively. 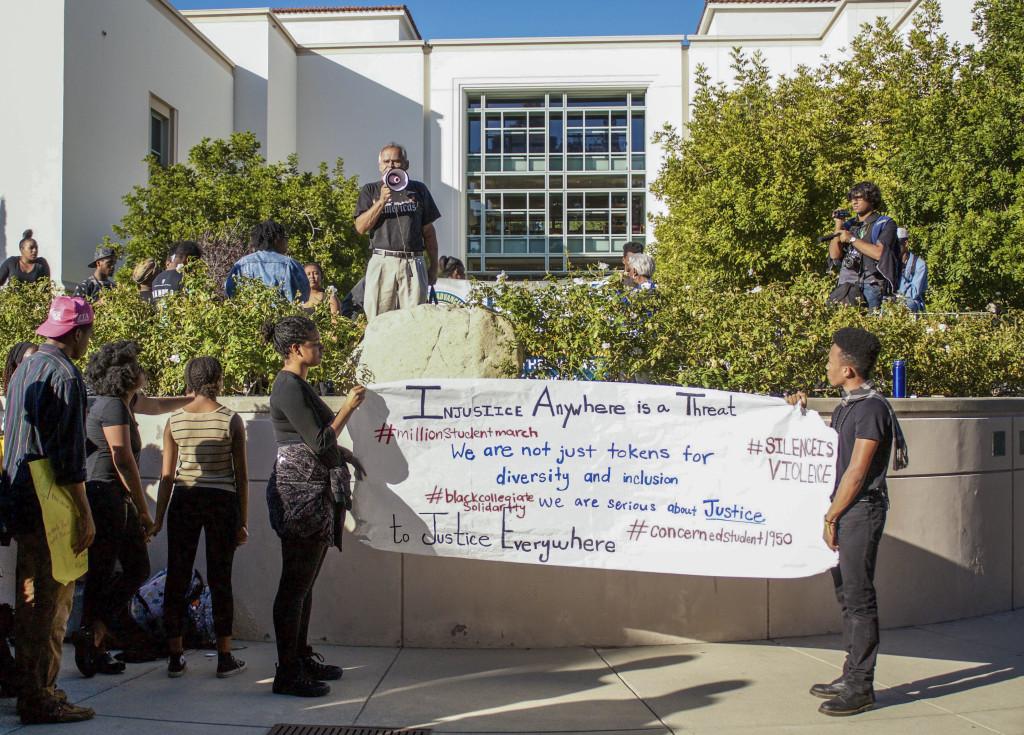 Aaron McKinney, a student of color at Claremont McKenna, was a participant in protests last fall. There had been ongoing tensions between students of color and the college’s administration since last year, after students expressed their desire to create a resource center, a safe space for students of color to come together.

McKinney said he appreciates the initiatives Claremont McKenna has established, like diversity workshops, but he said he thinks the workshops will not reach the people who need to be educated about diversity because they aren’t mandatory.

“The majority of people who are going to go to those types of events are people who already have a decent understanding of the issues of our society,” McKinney said.

McKinney said he thought the root cause of the issues that arose at Claremont had to do with the administration not prioritizing issues of diversity. This lack of diversity framework that causes unrest is something that Kevin McDonald, currently the vice president and provost for diversity and inclusion at the Rochester Institute of Technology, recognizes as he plans to begin his position as chief diversity officer at the University of Missouri on June 1.

He said it is important for colleges to have a diversity brand that they can present to the students. He said he wants to do this by increasing the diversity of students and faculty and by also incorporating diversity and inclusion into the general education requirements.

University officials attribute the loss of retention and enrollment to increasing competition among other colleges, a decrease in high school graduates from the Missouri area and the protests. 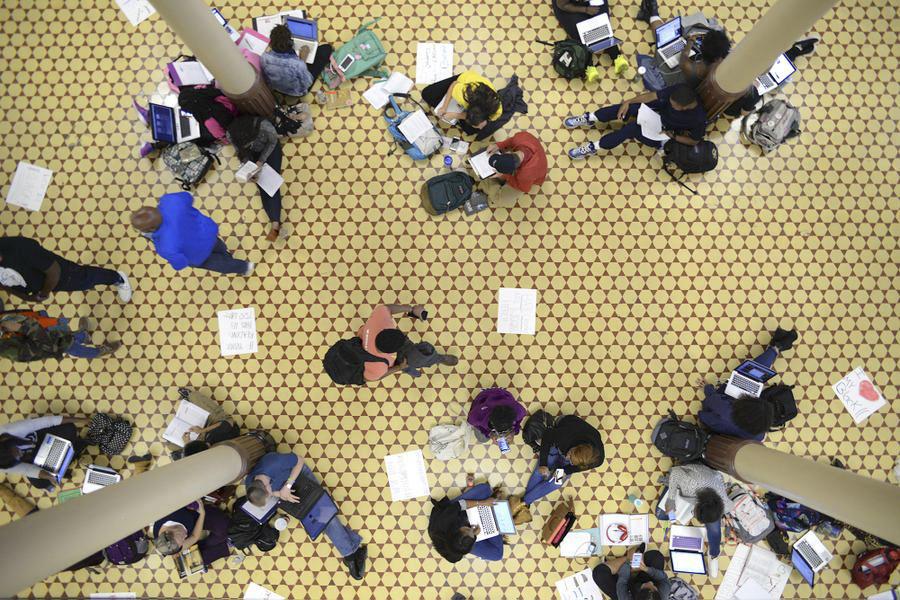 University of Missouri students band together for a sit-in protest Oct. 6, 2015 in the lobby of Jesse Hall. Courtesy of The Maneater

McDonald said there are still trust issues because of what happened last fall between students of color and administrators, which he hopes to mend. Senior Syed Ejaz, who was involved in the protests at Missouri last semester, agreed.

Ejaz said he thinks the administration is making gains in the diversity initiatives they’ve created, but still thinks they’re not being proactive enough.

“Even with the new leadership … there’s still been a failure to recognize that you can’t really sweep racial issues under the rug,” Ejaz said.

On March 7, the Concerned Student 1950 group protested in reaction to the working groups the administration has established to discuss racial issues. The group has criticized the working groups for not being action-oriented toward meeting the students’ demands.

Unlike Missouri, both Yale University’s and Claremont McKenna College’s application rates have increased. Ithaca College’s projected enrollment rates are not available due to the final application deadline being May 1, according to a representative in the undergraduate admissions office.

Ithaca College is also struggling to garner support for the diversity initiatives that have been implemented given criticism that there is not enough student and administrative collaboration to make the campus more inclusive.

People of Color at Ithaca College has not made any announcements since Rochon declared his early retirement. Representatives of POC at IC did not respond to attempts to reach them through social media for comment.

Senior Elijah Breton, who was involved earlier on with POC at IC but is no longer affiliated, said just because protests are not happening, it does not mean change toward a more diverse and inclusive campus is being stalled. He said he feels there is certainly a different environment on campus since the protests.

He said despite this momentum, he thinks there still could be improvements in seeing administrators’ getting more involved on campus to build relationships with students.

Patricia Rodriguez, associate professor in the Department of Politics, said the initiatives that have been put in place seem like a “checklist approach” and are “devoid of content.” She said although many diversity initiatives have been established, she does not see any change.

Asma Barlas, a professor in the Department of Politics, said for real change to happen, the top-down structure that the college is operating in needs to change. She said she wants to see the college looking to faculty and students for advice and guidance about how to implement effective initiatives. To address this problem, the Shared Governance Task Force is looking into ways to increase input from different representative groups on campus during decision-making processes.

However, Barlas said she does see change in the way that students are learning to speak up to the administration by using citizen protest. She said she thought the protests were “extremely inspiring.”

Sophomore Candice Tan, co-president of the Asian American Alliance, said she sees the same problems as Rodriguez and Barlas do in the top-down structure of the diversity initiatives.

She said she has friends who left the college because they too felt uncomfortable. She said one of her friends, who is Asian-American, left because of the lack of diversity at the college.

Tan said she has spoken with prospective students who were turned off by the lack of diversity on campus. She said she hoped that by showing them her organization, and others, that they could feel a sense of inclusion because she said that is the only way to create a more diverse campus: to bring in more diverse people.

“This is not a post-racial society, so in no way is it going to be perfect, or better,” Tan said. “But awareness is somewhere to start.”