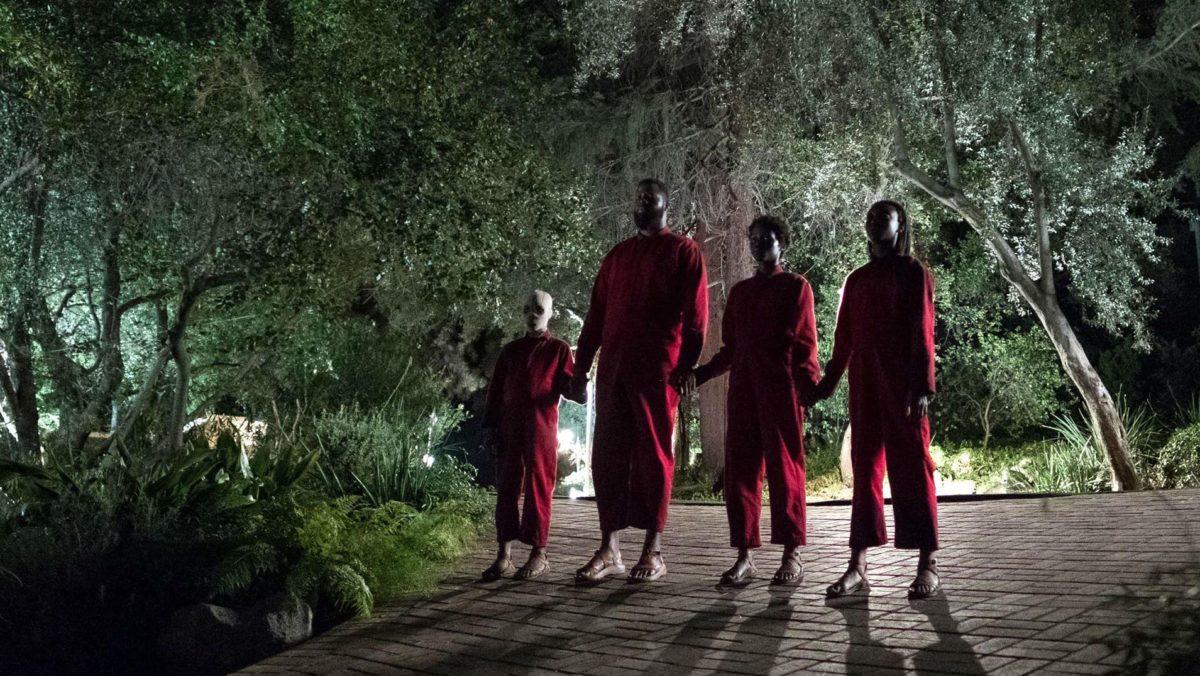 Monkeypaw Production
“Us” mixes a government conspiracy, well-balanced blood and gore, impressive acting and nuanced characters to create a strong commentary on cultural, societal and racial tension in the United States like xenophobia.
By Jake Leary
Published: April 1, 2019

“Us” is at once familiar and foreign — it’s a traditional slasher turned and twisted into something radical and bizarre.

The film follows the Wilson family on their annual summer vacation: This year, they’re beach bound. But Adelaide Wilson (Lupita Nyong’o), harboring grim memories from her last visit to the boardwalk, bristles at returning to the site of a mysterious trauma — flashbacks of her nightmarish excursion into a house of mirrors recur throughout the film. Her excitable husband, Gabe (Winston Duke), convinces her to let the past go, and, begrudgingly, she agrees, taking their children Zora (Shahadi Wright Joseph) and Jason (Evan Alex) to the beach.

Their vacation is cut short when a strange family appears in their driveway. They’re wearing red jumpsuits. They’re armed with long, golden scissors. And they look, sound and think exactly like the Wilsons.

Across America, the Tethered have risen.

Even before the scares start, Jordan Peele, writer, director and producer, infuses a persistent uneasiness into the film’s most mundane locals. Cheery amusement parks become nightmarish cacophonies of excess — a couple daintily feeding each other carnival food takes on a sinister aura: like a Rockwell painting gone wrong. And after night falls, and the shear-wielding Tethered emerge from their subterranean home, the film doesn’t descend into generic slasher schlock.

The Tethered are profane parodies, disturbed doppelgangers that emote like something alien desperately trying to pass as human. Though monstrous, they’re not monsters; they’re a lost people traumatized by their dark origins. Each exhibit exaggerated versions of their human traits — while the Wilsons’ friend Josh is playfully obnoxious, his Tethered is sinisterly vaudevillian. Their villainy simultaneously evokes sympathy and revulsion: The balance tipping one way or the other as Peele doles out information about their origin.

Unfortunately, sometimes Peele doesn’t dole so much as dump. Adelaide’s Tethered, Red, also played by Nyong’o, is the only one of her kind capable of speech, and as such, becomes the primary vector for exposition. Twice she halts the action to spell out critical plot and thematic elements, undercutting the preceding tension. Nyong’o’s perpetual rasp and shuffling, jagged movements salvage these otherwise limp moments: Her presence livens up the scenes the plot leaves lifeless.

The sloppy exposition only reveals so much. Much of Peele’s world is left ambiguous; we’re given enough information to understand the basics but come away unable to pin down smaller details. The illogic and peculiarity enhance rather than detract from “Us.” We’re as lost as the Wilsons: desperate to know just a little bit more about the Tethered’s origin.

Like Peele’s “Get Out,” “Us” doesn’t attempt subtlety; Peele’s commentary isn’t subtext, it’s text. Characters explicitly discuss the central metaphor: The inherent suffering caused by systems built on privilege from birth. Peele also capitalizes on the American fear of secret invasions and hidden plots and sums up both themes with a single line: “We’re Americans,” Red said as an introduction.

A final twist blurs the line between good and bad, right and wrong, friend and foe. And though it’s a little like the final line of a “Goosebumps” book, Peele does a remarkable job of seeding the twist from the opening flashback. If you’re thinking there’s something off about Adelaide and her enthusiastic, animalistic displays of violence, you’re on the right track.

For all its twists and turns, “Us” depends on slasher archetypes. The Wilsons are the quintessential horror family — the punny father, the serious mother, the bratty daughter and the eerily precocious son. They’re all there. The only major difference is their race — rarely are black families central figures in a commercial slasher. But Peele’s ability to layer humor over their interactions makes them feel like a family: a real one who knows each other well enough to anticipate Gabe’s bad jokes or Zora’s exasperated teenisms.

It is also not grimly nihilistic in the way slashers tend to be; despite the Tethered’s high body count, the Wilsons come away largely unscathed. It’s refreshing for a horror movie to forgo fetishistic violence and familial destruction — there’s gore aplenty, but it’s not excessive.

“Us” feels like a feature-length “Twilight Zone” episode — which is appropriate given the film was inspired in part by an episode of the show. Peele probes the American psyche, manifests cultural fears and builds on decades of genre classics.