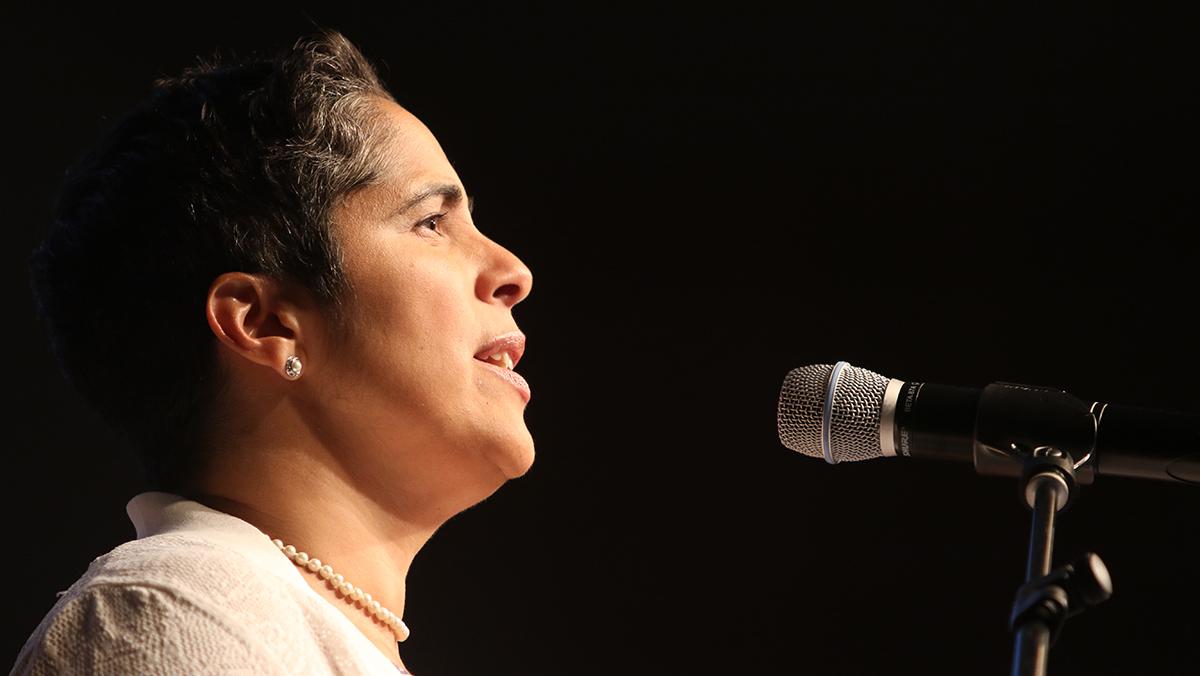 Editor’s Note: On May 17, over 10 days after the publication of the story, “After saying her salary would freeze, President Collado’s compensation rose,” Ithaca College leadership reached out to The Ithacan, calling for a retraction of the story.

The reasons provided, as stated in a recent Intercom post from David H. Lissy ’87, chair of the Ithaca College Board of Trustees, was former President Shirley M. Collado did not receive a salary increase from the 2018–19 to the 2019–20 fiscal years, along with a “fundamental misunderstanding of the difference between a calendar year and a fiscal year, and how compensation is calculated in each.”

The Ithacan stands by its reporting. Prior to publication, The Ithacan had its calculations regarding Collado’s monthly base compensation — which did take the difference in calendar year and fiscal year into account — verified by a lawyer, a professor and a chief financial officer.

all of whom had knowledge of the Form 990. Following the request for a retraction, The Ithacan had the calculations re-verified by two lawyers and a professional journalist who has extensive experience reporting on the Form 990.

For the sake of clarity, The Ithacan will provide how it determined Collado’s monthly base compensation.

The first Form 990 from Ithaca College that Collado was listed on was for the 2017–18 fiscal year. The fiscal year began June 1, 2017, and ended May 31, 2018. The compensation listed was for the 2017 calendar year. She began working at the college July 1, 2017, and her base compensation for the last six months of the calendar year was $235,410. By dividing this number by six, for the six months that Collado was compensated for the calendar year, the result is the number $39,235 per month, which was Collado’s base compensation for 2017, which provides a baseline for the first five months of 2018.

The third 990 form is for the month June 2019, before the college changed its fiscal year. No compensation is listed for the month.

The Form 990 for the 2020–21 fiscal year was released after The Ithacan published its story, so it was unable to be taken into account.

While the college maintains the claims that Collado’s compensation did not increase, the only public document that records the compensation of the college’s leadership is the Form 990.

Original Reporting: Despite claiming multiple times that she froze her salary for the 2019–20 fiscal year, former Ithaca College President Shirley M. Collado’s monthly base compensation increased by $1,039 to $41,174 per month, according to the most recent Form 990.

Collado served as president from July 2017 to August 2021, the shortest tenure out of the college’s 10 presidents. Collado stepped down in July 2021, served as senior adviser to the Ithaca College Board of Trustees and then-interim president La Jerne Cornish until she became President and Chief Executive Officer of College Track in January 2022. Cornish served as interim president from August 2021 to March 2022, when she was named the 10th president of the college March 7. Collado brought Cornish to the college to serve as provost and senior vice president for academic affairs, and she was later promoted to provost and executive vice president.

These increases occurred as she led the college through a pre-pandemic financial crisis and the COVID-19 pandemic. As a part of the five-year strategic plan, Ithaca Forever, the college commenced the Academic Program Prioritization (APP) — an austerity measure that Collado and then-Provost Cornish called “transformative change.” While these cuts had always been a part of Ithaca Forever, Collado and Cornish have said the COVID-19 pandemic’s impacts on the college’s finances forced the plan to accelerate, resulting in a large number of cuts being made in a small amount of time. Despite protests, 116 full-time equivalent (FTE) faculty positions and 26 departments, programs and majors are in the process of being eliminated.

Part of Collado’s imputed income — benefits employees receive that are not part of their salary — included a cleaning person, a leased vehicle and the personal use of housing, according to the 2019 Form 990.

In addition to salary, the president’s compensation also covers the use of a car, expenses related to a home office, two club memberships for college business and the standard benefits package.

Collado’s claims of a compensation freeze

A May 22, 2019 message from Collado and the board of trustees regarding the fiscal year 2020 budget stated that the president, the Senior Leadership Team (SLT) and each of the five deans would not receive a salary increase for the 2019–20 fiscal year.

“The senior leadership team collaboratively recommended to the board that these salaries be excluded from the pool because they felt very strongly about the importance of continuing to invest as much as possible in faculty and staff as well as in our strategic plan, even in the context of a challenging year,” the May 2019 statement said.

Additionally, in a set of October 2020 comments to The Ithacan, Dave Maley, director of Public Relations and College Communication, claimed that Collado and other college leadership had frozen their salaries for the 2018 and 2019 calendar years.

Collado also said in a March 2021 interview with The Ithacan that she and other members of the SLT froze their salaries during 2019–20.

“Members of the Senior Leadership Team last year and the year before took decreases and no increment,” Collado said in the interview. “And the year before that, we did not take an increase and really upheld the need to provide increases for everyone else who’s employed at the college.”

Collado has not responded to a request for comment regarding her compensation for the 2019–20 fiscal year.

When asked if Collado and other leadership had their pay frozen for the 2019–20 fiscal year, Maley said the pay freeze did occur during that year.

“For the president and for any members of the SLT who were at the college for the entirety of 2018 and 2019, any differences in base compensation for them from those two years has solely to do with calendar-year timing differences in the pay periods for those years,” Maley said via email. “The college operates on a semi-monthly payroll schedule for exempt positions (non-hourly).”

Timeline of Collado’s leadership during the college’s financial crisis

During the time that Collado’s base compensation increased, the college had entered a financial crisis — before the COVID-19 pandemic had even begun. This is mostly due to the decline of small American colleges, which face financially uncertain futures as demographics begin to change, and the fact that the college’s budget model relies heavily on student funds.

In January 2019, Bill Guerrero, former vice president of Finance and Administration, warned that this structure was not sustainable. This was in reference to the college’s 2017–18 budget; 88% of which came from student funds, which includes tuition, room and board. This would mean that if enrollment rates were to begin decreasing the college could enter a financial crisis. Enrollment at the college has decreased over the past few years. In Fall 2019 there were 6,266 students, in Fall 2020 there were 5,354 students and in Fall 2021 there were 5,239.

In February 2019, the calendar year in which Collado’s pay increased — Collado made the campus community aware of oncoming changes to the college’s budget at an All-College Gathering. At the gathering, Collado emphasized the need to diversify the college’s revenue streams beyond just student funds.

At an All-College Gathering in August 2019, Collado acknowledged that the college was entering a financial squeeze and encouraged budget cuts.

“These numbers do not tell us everything’s fine,” Collado said at the gathering.

At that All-College Gathering, Collado did not acknowledge her compensation increase.

In November 2019, an analysis by Forbes magazine found that Ithaca College had a C+ college financial health grade, and a financial Grade Point Average (GPA) of 2.34.

Less than two months before the COVID-19 pandemic closed down the college, Collado and her administration were already preparing for structural and financial changes. At a January 2020 All-College Gathering, Collado said that oncoming changes would be “uncomfortable.”

“We can’t be in the business of chasing numbers that don’t make sense anymore for us,” Collado said at the gathering.

When the COVID-19 pandemic began, students at the college were sent home. The college laid off or furloughed, eliminated the positions, or reduced the hours of 264 employees, mainly in the Office of Facilities and Dining Services. Employees in dining made $11.80–12.20 per hour during the 2019–20 academic year. It is unclear if Collado’s compensation increase was affected, as the fiscal year ended in June 2020 and the Form 990 will not be made available until July 2022. However, Collado’s claims to The Ithacan of a pay cut during the 2020 calendar year would mean that it would have affected the pay increase she took during the 2019 calendar year.

Collado’s administration chose to hold Fall 2020 virtually, which created an $8 million deficit. By Fall 2020, only 5,354 students were enrolled at the college — a drop of 498 students. Protests against oncoming faculty cuts began in November.

By February 2021, the proposed cuts were approved. Protests on campus continued and candlelight vigils were held to mourn the members of the campus community who would lose their jobs.

In July 2021, Collado announced her departure from the college.

Senior Kellie Swensen is a leader of Open the Books, a coalition of students, faculty and alumni who have been calling for increased financial transparency from the college. Swensen said Collado’s contradictions are part of a larger disregard for truth-telling by top-level members of the college’s administration.

“There’s no meaningful dialogue happening,” Swensen said. “They love to pretend that they’re having difficult discussions and coming together with people whose views are different from theirs. But it is inconsequential because it’s all just about optics. They are changing absolutely nothing about their actions and changing absolutely nothing about the behind the scenes.”

Swensen believes this continued behavior has led the administration to a point where it may never be able to regain the trust of the campus community.

“I think the primary effect this leaves behind is [that] the trust between the leadership and everyone else is fundamentally broken,” Swensen said. “I don’t know how you repair that. That’s not an easy thing to fix. There’s no one thing that they can say that is going to make that problem go away. There’s a gradual process that has to happen to rebuild trust. I don’t know that that can happen with the current leadership that we have.”

Correction: In a previous version of this article, a number of instances conflated the fiscal year and calendar. For example, it was stated that “For the 2019–20 year, Collado’s base compensation was $487,853.” Collado’s base compensation was $487,853 for the 2019 calendar year. This section of the story has been clarified and all instances have been corrected.