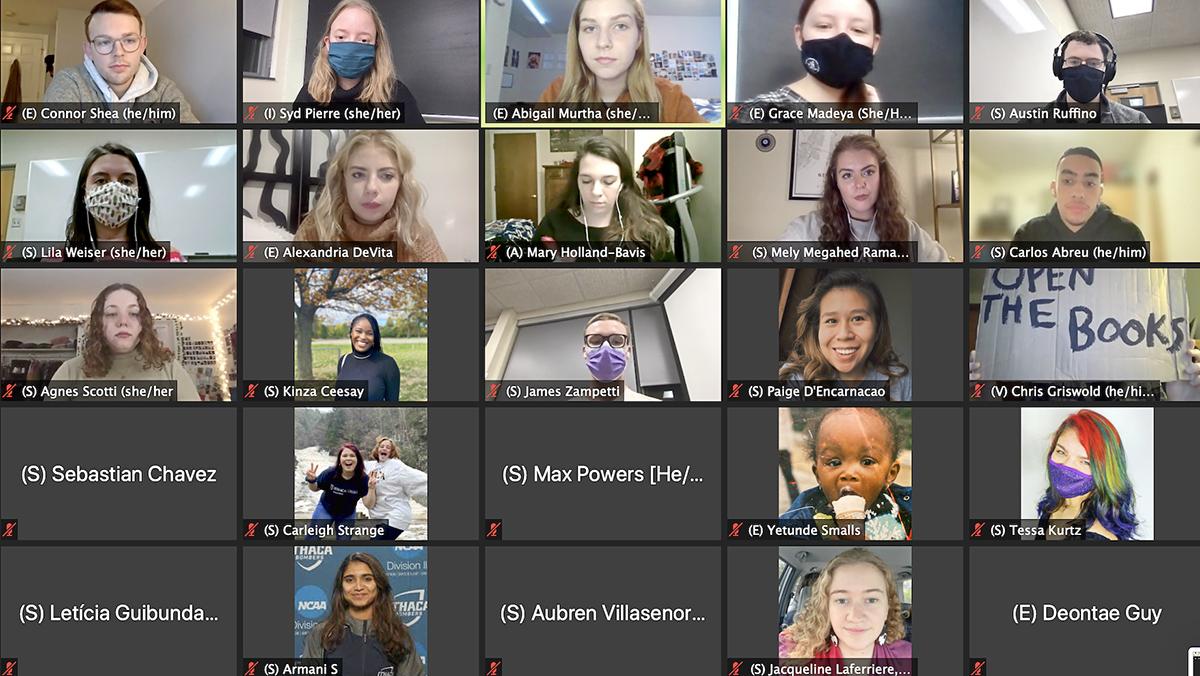 Courtesy of Student Governance Council
The No Confidence in Shape of the College Recommendation resolution resolves stopping the implementation of the “Shape of the College” draft in order to incorporate more student, staff and faculty input.
By Syd Pierre — Staff Writer
Published: February 24, 2021

The Ithaca College Student Governance Council (SGC) passed a resolution expressing no confidence in the “Shape of the College” proposal outlining faculty and program cuts at its Feb. 22 meeting.

The No Confidence in Shape of the College Recommendation resolution resolves stopping the implementation of the “Shape of the College” draft in order to incorporate more student, staff and faculty input. The Academic Program Prioritization Implementation Committee (APPIC) released the draft “Shape of the College” document Jan. 13 and released its final recommendations for the Academic Program Prioritization (APP) process Feb. 18. The proposal recommends eliminating 116 full-time equivalent (FTE) faculty members and 26 majors, departments and programs.

The bill recommends that the college create a committee composed of five students, five faculty and five staff representatives selected by the campus community to be involved in the decision–making process; establish regular meetings with the SLT to create engagement between different groups, like the SGC, the Board of Trustees, the Contingent Faculty Union, Faculty Council, Staff Council and the campus community; and email weekly APPIC updates. Updates for the APP are currently posted on the Office of the Provost’s website.

The bill recommends that these recommendations be implemented before President Shirley M. Collado and La Jerne Cornish, provost and senior vice president for academic affairs, announced their final decision to adopt the “Shape of the College” document Feb. 24.

“On Monday, the Student Governance Council voted no confidence in the Shape of the College Recommendation,”  the SGC said in a Feb. 24 statement to The Ithacan. “We stand by our students and we will continue to advocate for shared governance in the hopes of promoting student voices and concerns.”

The SGC passed the No Confidence in Shape of the College Recommendation resolution with a roll call vote of 15–1 with no abstentions. Sophomore Austin Ruffino, senator-at-large, voted against the bill. At the meeting, Ruffino did not say why he voted this way and has not responded to requests for comment.

“We understand that cuts are somewhat inevitable in the survival of educational institutions,” Scotti said. “However, when you don’t include students or faculty in the decision–making process, it doesn’t represent like shared governance, and it doesn’t prove that the higher administration is really on our side.”

The APPIC and Academic Program Prioritization Advisory Committee (APPAC) are composed of members of the Senior Leadership Team (SLT) and deans at the college. No faculty members, staff or students are part of the APPIC. The interim deans for the School of Music, School of Business and the Roy H. Park School of Communications — who are still faculty members — are not on the APPIC but are on the APPAC. Sara Haefeli, associate professor in the Department of Music Theory, is a co-chair of the APPAC.

Students, faculty and alumni at the college have expressed their disappointment in the APPIC recommendations. Alumni and programs that are slated to be cut have written letters opposing the cuts. The Open the Books coalition has held five protests on campus. Students and faculty members have created petitions. A survey from the Faculty Council showed that a majority of participating faculty members are resistant to the cuts.

Scotti said she wrote the bill as a formality and as one of the only ways she could communicate with the SLT.

“I think that the fact that we had an entire student body organize through grassroots organizations, protest peacefully outside of buildings on campus, and they were unable to get even a formal meeting one-on-one with the higher–up administration that has been employed to take care of their students is honestly very, very, very disappointing,” Scotti said.

She said that she did not expect anything to happen as a result of the bill because the administration has not listened to previous requests to delay the cuts and has not responded to previous calls to change the makeup of the committees.

Scotti said she thought it would be a failure as representatives of the student body to not write  it. Scotti noted that there were 20 other students involved in the bill who declined to sign it out of fear of retaliation from the SLT.

The SGC also passed the 2021 Ithaca College Financial Transparency recommendation, which encourages the college to release a breakdown of the fiscal health of the college. In Fall 2020, the SGC passed a similar bill — the Fall 2020 Tuition Transparency Request Bill — which recommended that the SLT publish information about the cost of tuition for Fall 2020. The administration declined to enact this request.

The SGC passed the 2021 Ithaca College Financial Transparency recommendation with a vote of 16–0 with no abstentions. The bill recommends that the college release financial information, like options that were evaluated prior to the APPIC recommendation;explanations of how the “Shape of the College” will allow the college to overcome current financial issues; the cause of the college’s current financial status and a breakdown of SLT salaries per IRS Form 990, the tax form the college is required to file that reports the results of its financial operations.

The Form 990 for previous fiscal years are publicly available for viewing. Form 990s are due on the 15th day of the fifth month following the end of the organization’s taxable year, according to the IRS. The college’s fiscal year is from July 1 through June 30 of the following calendar year, meaning the current fiscal year will end June 30.

The college has denied requests from The Ithacan to release the current salaries of the SLT.

The bill was sponsored by the same senators, individuals and organizations that sponsored the No Confidence in Shape of the College Recommendation resolution.

Chavez said the bill was written to gain more transparency for the campus community.

The SGC debated including the section about the SLT salaries in the bill. Senior Carleigh Strange, School of Music senator, said she was worried about the response that section would get from the SLT.

“As much as I would love to know what these salaries are, I think that this is a perfect excuse for them to look at this recommendation and say, ‘Absolutely not, I’m not going to share that information, no way,’ and then discredit the entire recommendation,” Strange said.

The SGC also passed the Election Day Holiday act with a vote of 16–0 with no abstentions.

The bill resolved that the college make Election Day a campuswide holiday and that the policy be stated in academic calendars. The SGC passed the 2020 Ithaca College Voting Act and the Excused Absence for Poll Workers Recommendation in Fall 2020. The SLT declined these because Election Day is not a holiday and the college has no formal policy for excused absences but said that faculty should have been flexible with students on this day.